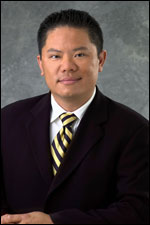 Kevin Chen, DMD, MS values his relationship and strives to satisfy the needs of each patient. Realizing the importance of patient-doctor interaction, he often spends a significant amount of time during a consult to listen and to understand why a patient is in his chair. Born in Taiwan, Dr. Chen came to the States at the age 12 and spent most of his adolescence in the east coast before settling down after residency in California.

Dr. Chen attended Boston University and received a Bachelor of Arts degree in Biology. In 1995, he was accepted to Harvard School of Dental Medicine and received the Doctor of Dental Medicine degree four years later. With his interests in Periodontics, he then continued and obtained the Certificate in Periodontics and Implantology, Masters of Science in Oral Biology, and Certificate in IV Sedation from University of California, San Francisco.

Dr. Chen is board certified by the American Board of Periodontology and is an active member of the dental societies such as American Academy of Periodontology, California Society of Periodontists, The International Congress of Oral Implantologists, American Dental Association, California Dental Association, Sacramento District Dental Society, and a mentor for minority students interested in pursuing a career in Dentistry. Currently, he is a clinical instructor at Mare Island VA GPR program, an examiner for the conscious sedation permit, an expert for Dental Board of California. Dr Chen also resides on the board and is the incoming President for California Society of Periodontists.

Dr. Chen has been with the Capitol Periodontal Group since 2002.  During his spare time, he enjoys playing tennis, basketball, and golf with friends.